Listen To My Latest Podcast Episode:: 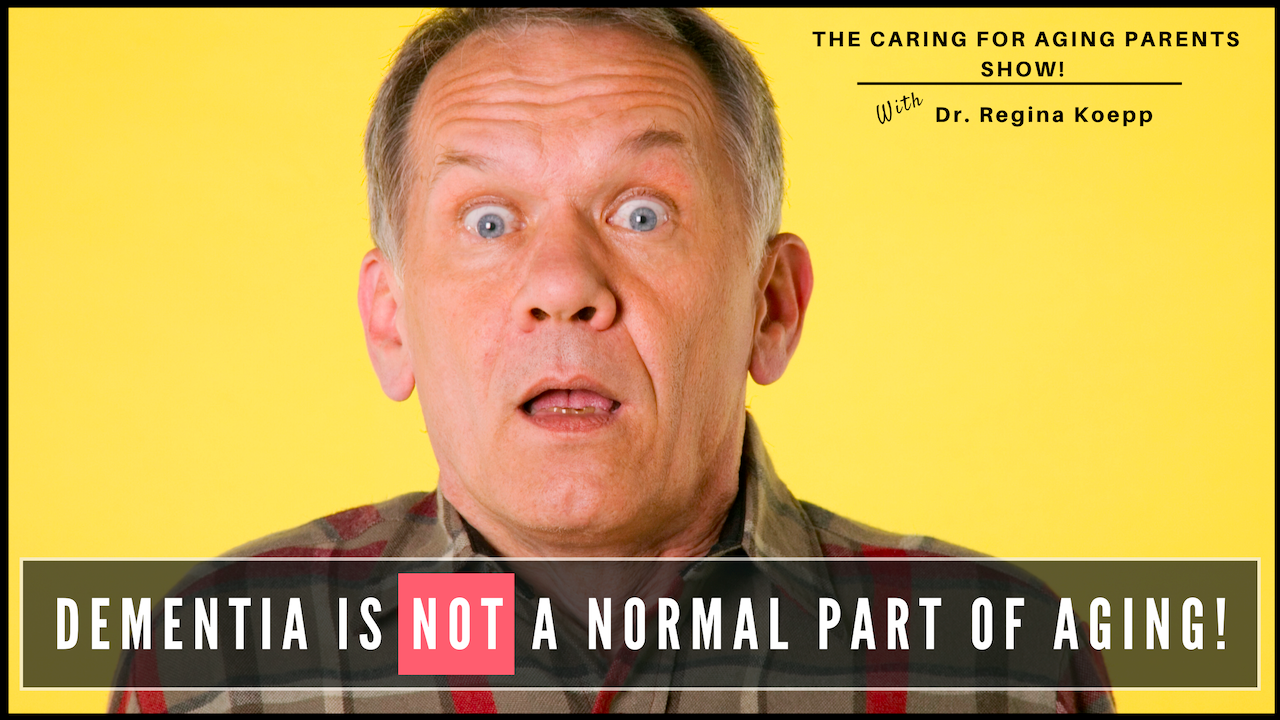 These statements about older adults make the assumption that with aging comes serious cognitive problems, like dementia! But, these ideas are actually not supported by science and in fact, are a myth and a direct result of ageism, which includes bias and stereotypes based on age, and affects older adults more than any other group.

In today’s episode, I want to share an important message that DEMENTIA IS NOT A NORMAL PART OF AGING!

There is a big myth out there that with age comes dementia. And while, with age the risk for dementia does in fact increase, it’s important to know that Dementia is NOT a normal part of aging!!

Dementia is a general term that we use to describe a certain type of brain condition that affects cognitive function.

Cognitive Function is a fancy term for how the brain thinks, remembers, processes information, reasons, uses judgement to solve problems, and so much more.

Dementia is a Neuro-Degenerative Disorder:

Neuro meaning  “brain”, Degenerative meaning “gets worse over time” (to degenerate), Disorder meaning impairments in functioning, like impairments in a person’s ability to work, drive, manage money, care for themselves, and so on. 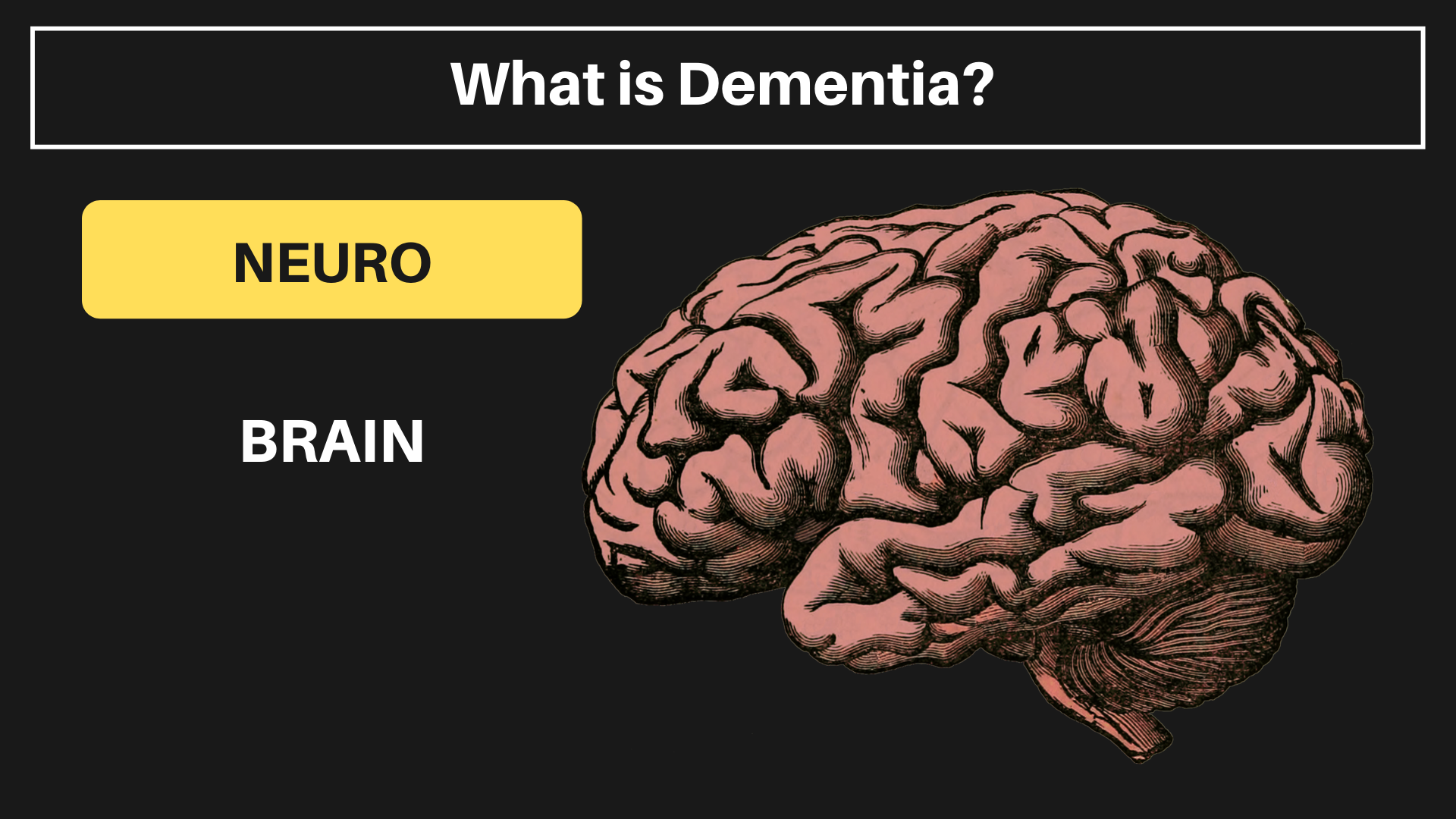 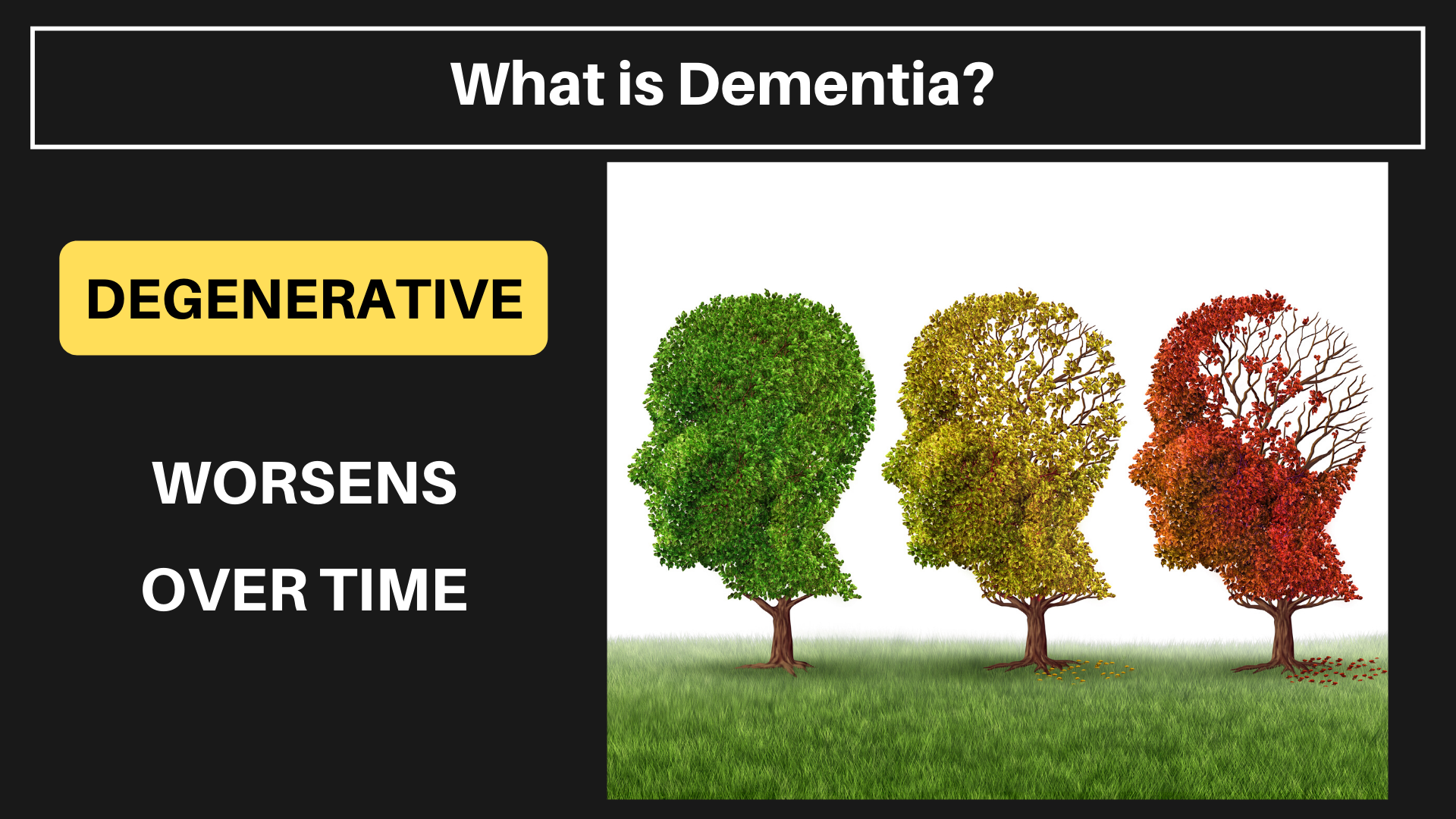 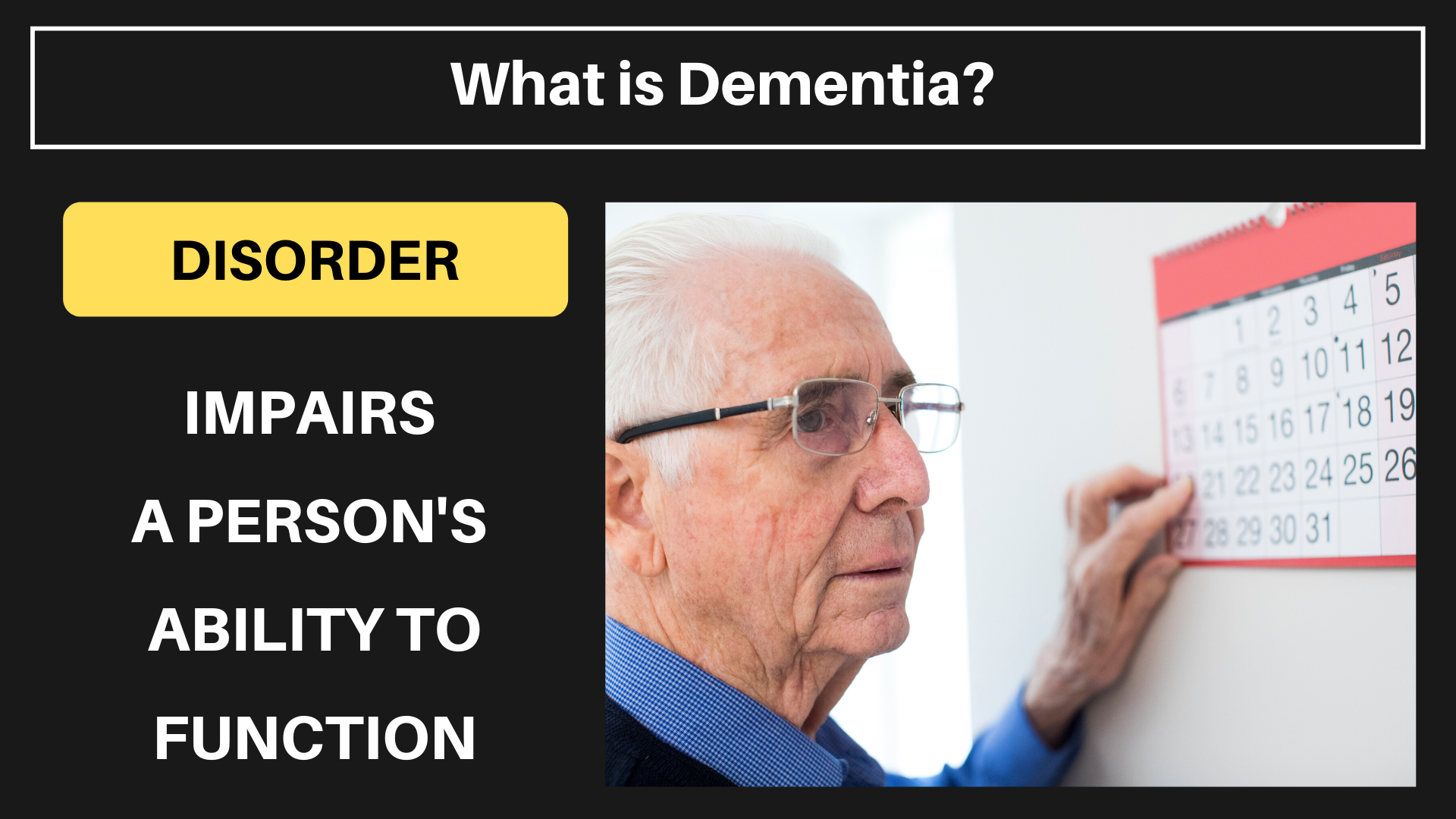 Dementia includes progressive memory loss, but that's not all. Dementia is NOT ONLY memory loss. It must include at least one other cognitive process, like language (not being able to hold conversations), or like judgment (giving telemarketers money when your parent would never have done that in the past), for example. 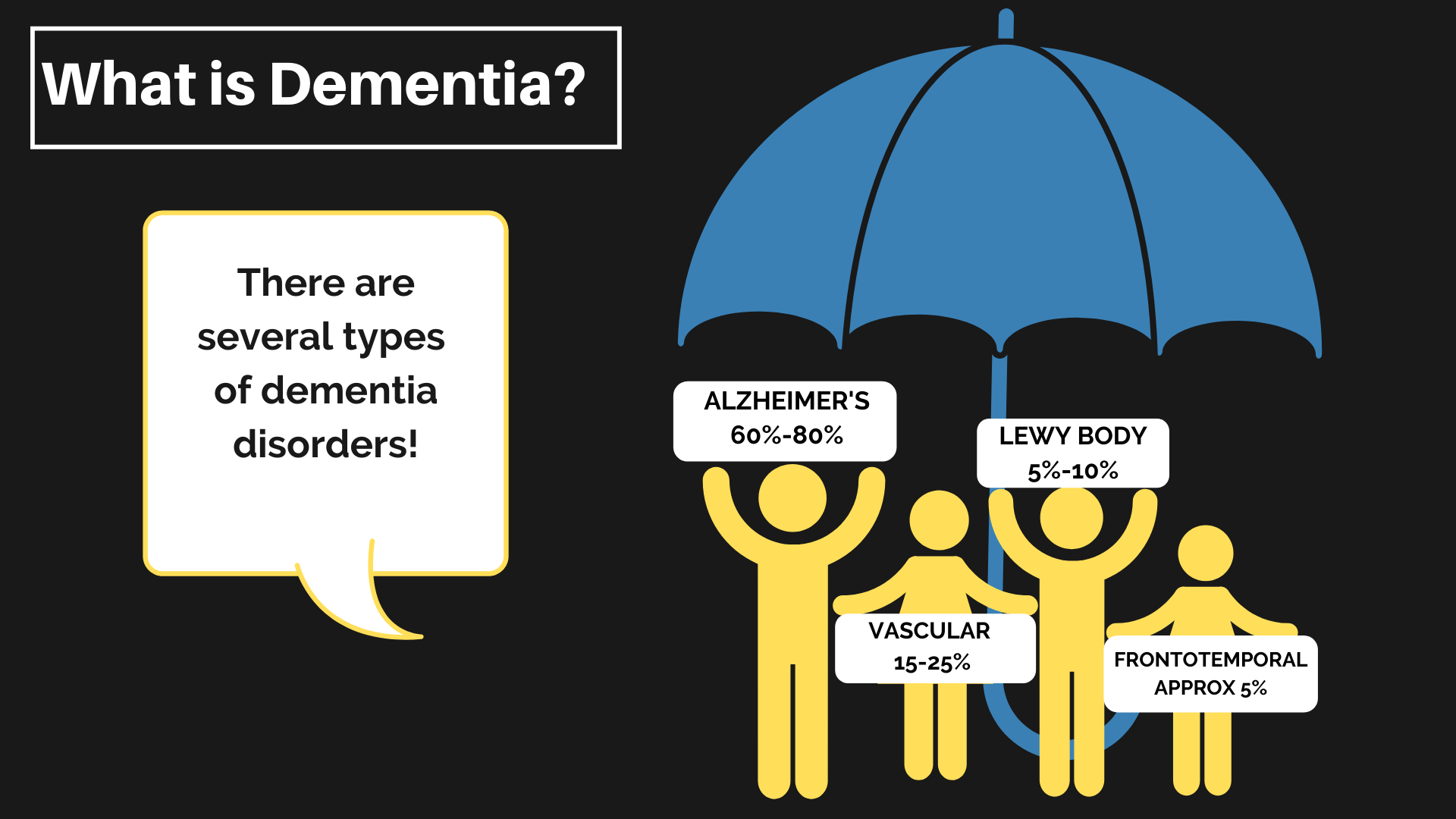 Dementia is essentially an umbrella term, and underneath the umbrella are different types of dementia disorders, like Alzheimer’s Disease, Vascular Dementia, Lewy Body Dementia, Frontal Temporal Dementia, and so on.

But no matter what type of dementia a person has, ALL types of dementia affect cognitive function and eventually a person’s ability to care for themselves independently.

All types of dementia are progressive, meaning that they get worse over time. Sadly, there is no cure.

While the beginning stages of the different types of dementia can look very different, the later stages of most dementia disorders look very similar, with profound cognitive impairment and making a person largely unable to manage their basic needs starting with preparing meals, driving cars, managing money, and ending with bathing, grooming, and going to the bathroom.

Dementia is really complex! In early stages, it can be hard for doctors to identify or diagnose it. We do our best to use brain scans, and neuro-psychological testing to identify dementia disorders, but dementia can only be diagnosed with 100% certainty by doing an autopsy and looking at the brain after a person dies.

Now - here's the message, I really want you to hear! 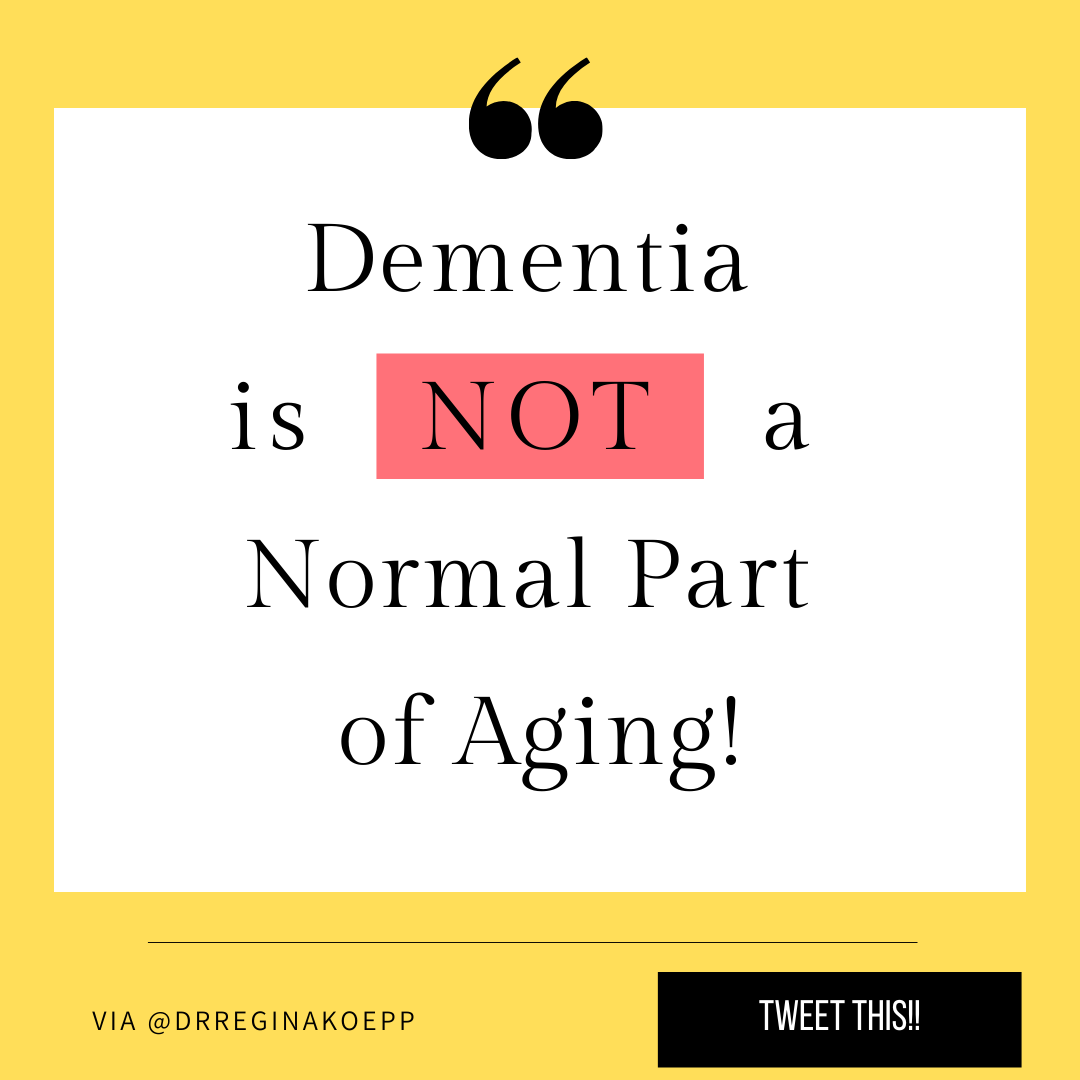 According to the 2019 Facts and Figures Report published by the Alzheimer’s Association,  one in 10 of people age 65 and older have Alzheimer’s Disease. That is only 10%!

But, that's just Alzheimer's Disease! What if you combine all dementia disorders, what percentage of people have dementia in older adulthood?

According to the Institute for Dementia Research & Prevention at Pennington Biomedical Research Center, it is estimated that 1 in 6 women (16.67%), and 1 in 10 men (10%), who live past the age of 55 will develop dementia in their lifetime.

So there you have it! The majority of older adults DO NOT HAVE DEMENTIA!

It is so important that you know that dementia is not a normal part of aging! Here’s why!

When you have concerns about your parent’s memory, language, how they are problem solving (you get the idea) that are causing problems in their life or concerning you, it’s important to take these changes seriously and to help your aging parents see their doctor. 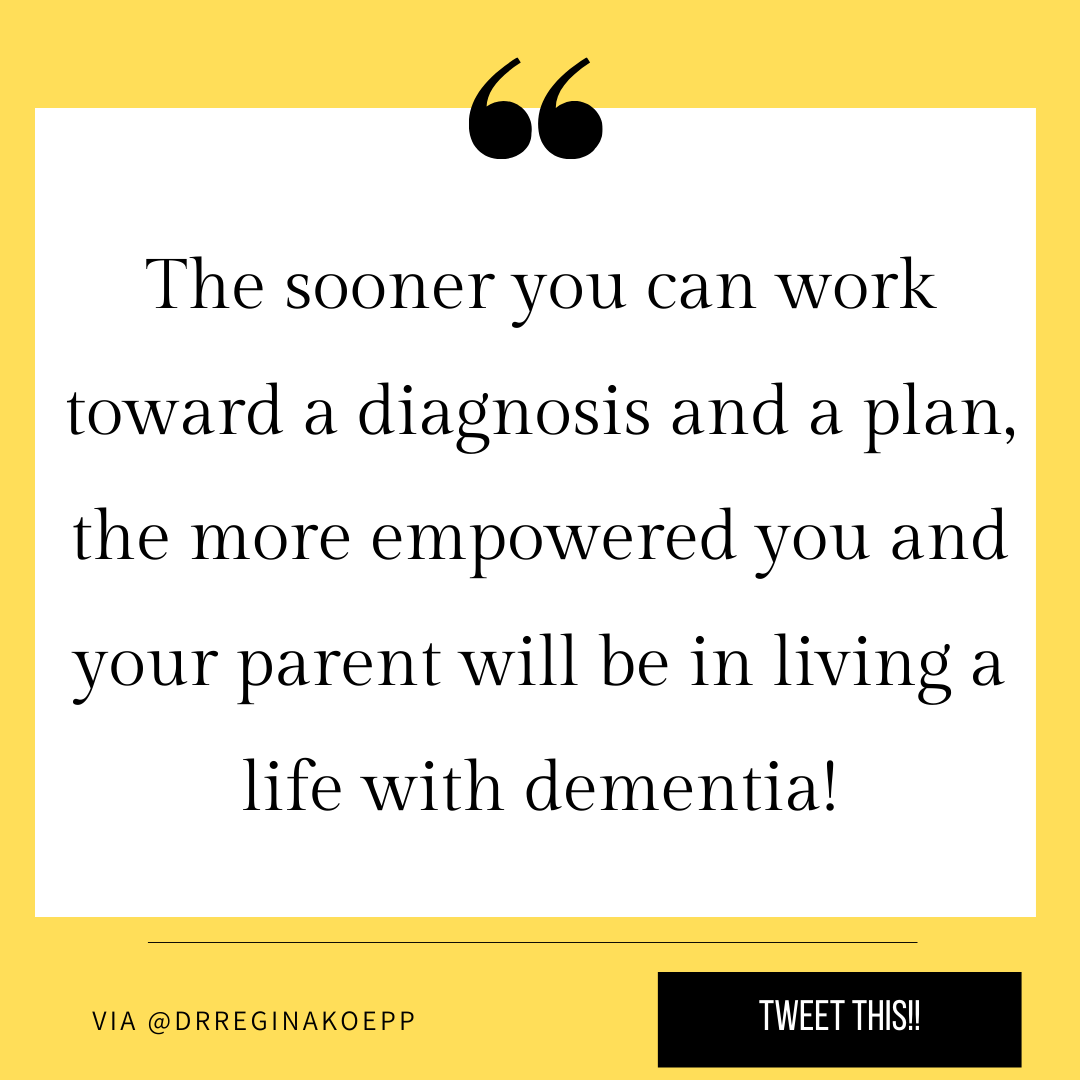 If you’re concerned about someone you love possibly having a dementia disorder, please download my freebie called,  Dementia 101: A Beginner’s Guide To Dementia Disorders.

In this guide, I describe what dementia is and isn’t. I discuss the difference between normal changes in the brain with aging and dementia.  I break down the phases of dementia, and what to do if you're worried that your aging parent may have dementia.

So, take a moment to download it here! It answers some of the most frequently asked questions I get about dementia. 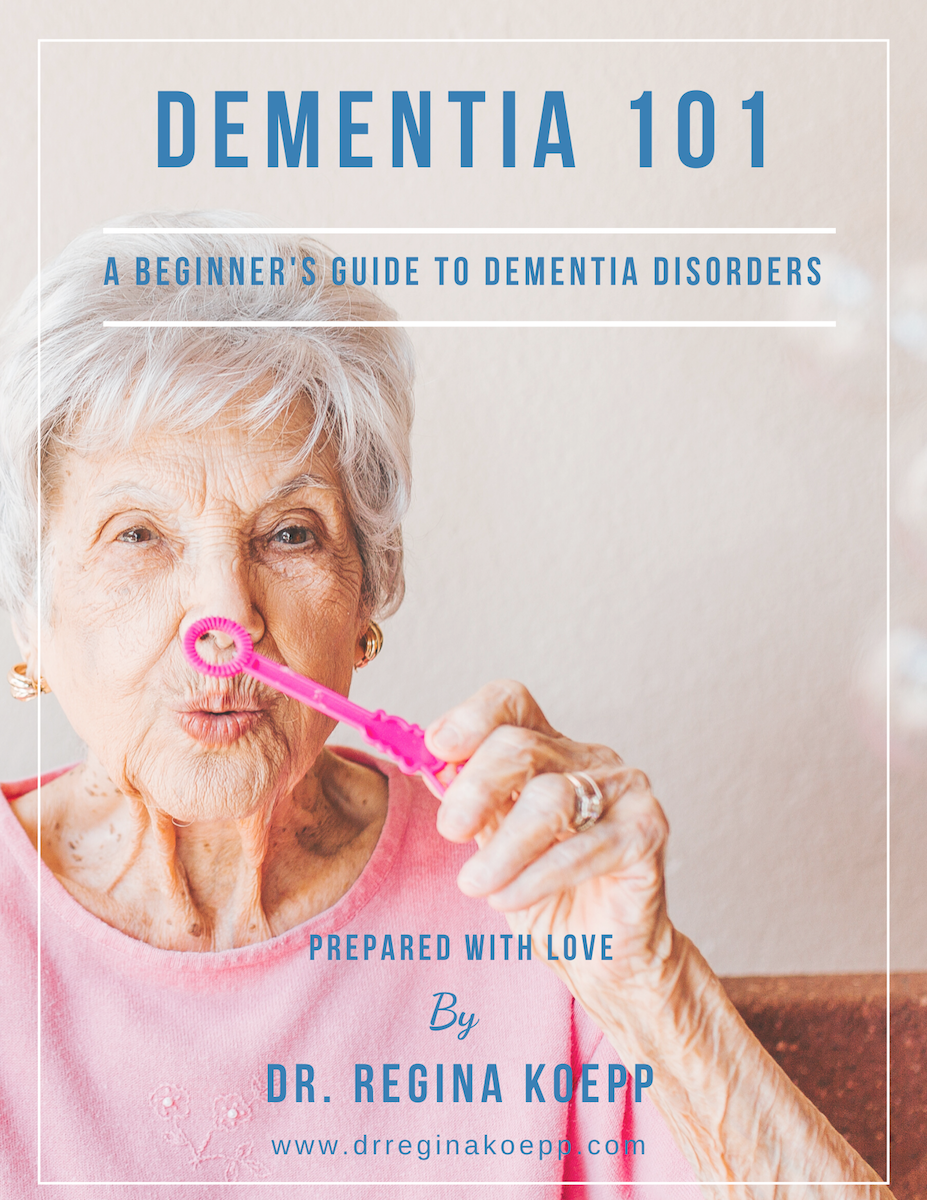 Be sure to share this video with your friends who are caring for their aging parents. Because nobody should have to do this caregiving-thing alone!

Lots of love to you and your family!

Check out these related episodes: 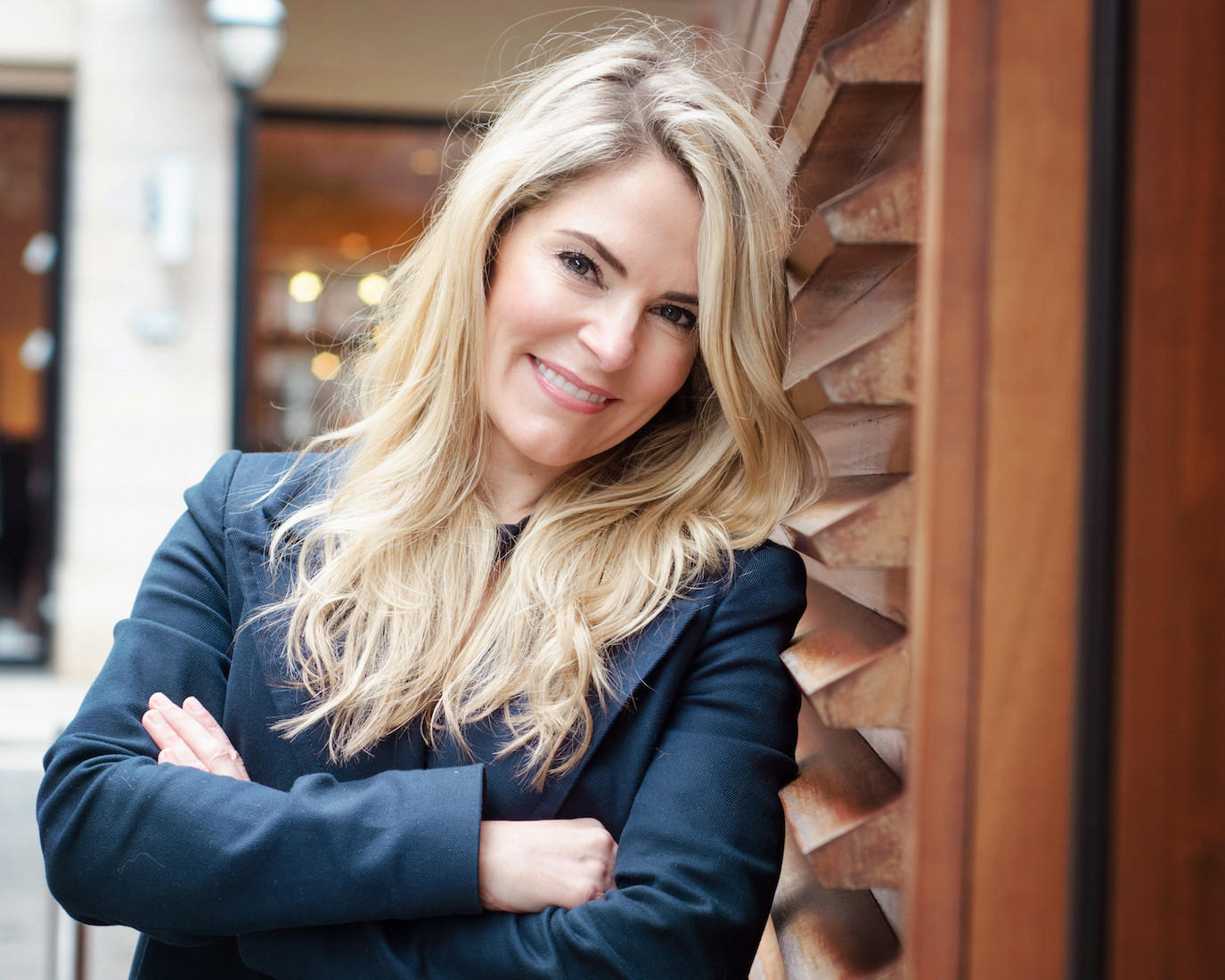 Get a Weekly Mental Health Tip

Sign up to receive a weekly mental health tip designed with older adults in mind. 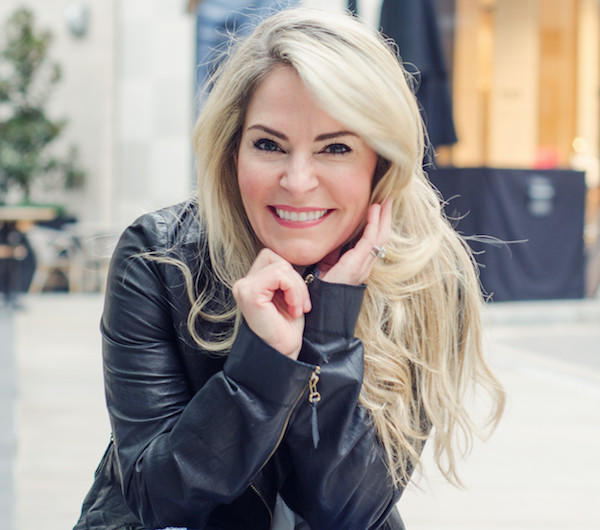 I'm so glad you're here!

Older adults have mental health needs just like everyone else. But here’s the thing: Older adults are often left out of the conversation when it comes to mental health and wellness. Together we can change this.

I created the Psychology of Aging Podcast to have conversations about mental health and wellness that include older adults. We talk about common mental health concerns as we age, resources to help older adults live their best lives, and we have fun doing it. 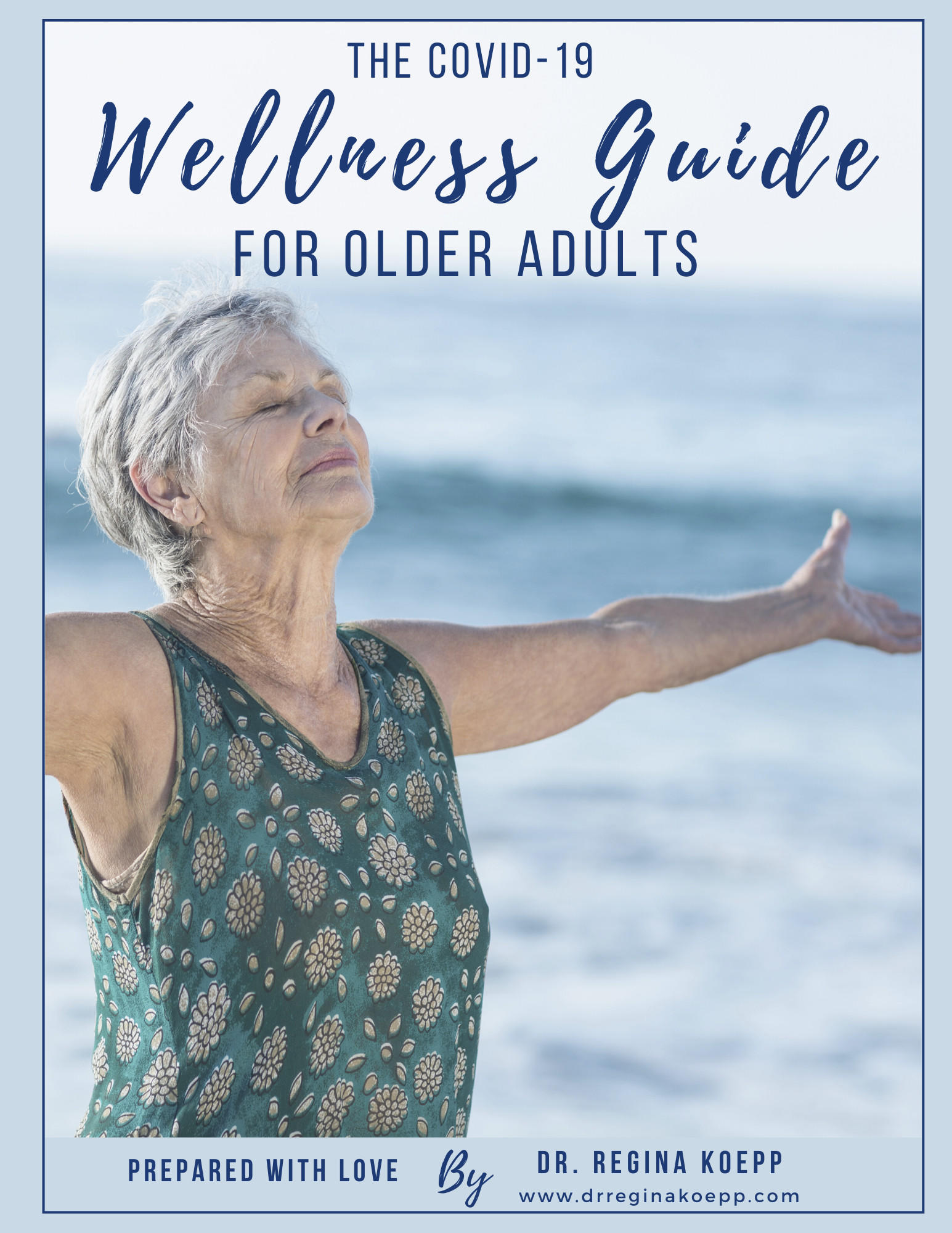 Stay mentally and physically well during the Coronavirus Pandemic with my wellness guide for older adults. 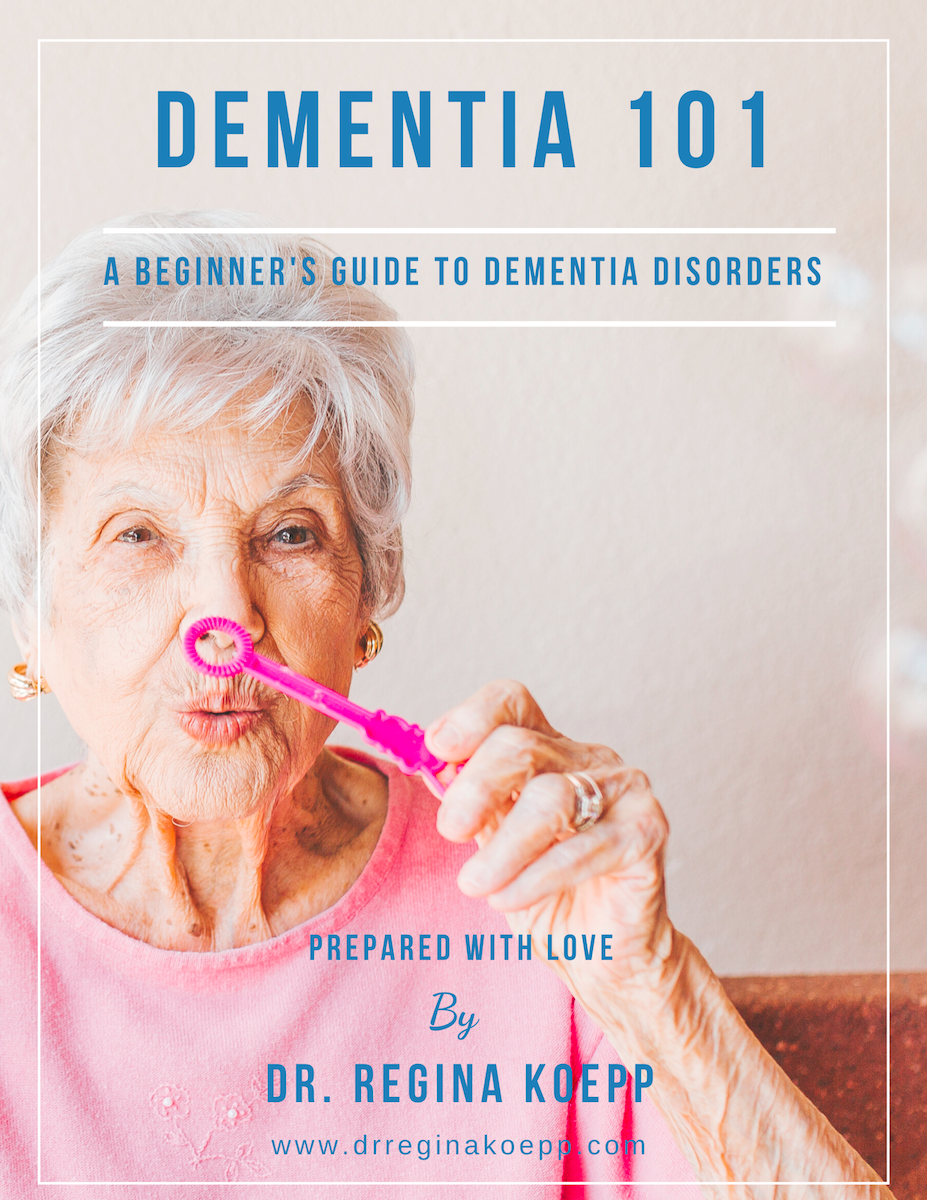 Learn all about dementia in this FREE Dementia 101 Guide! 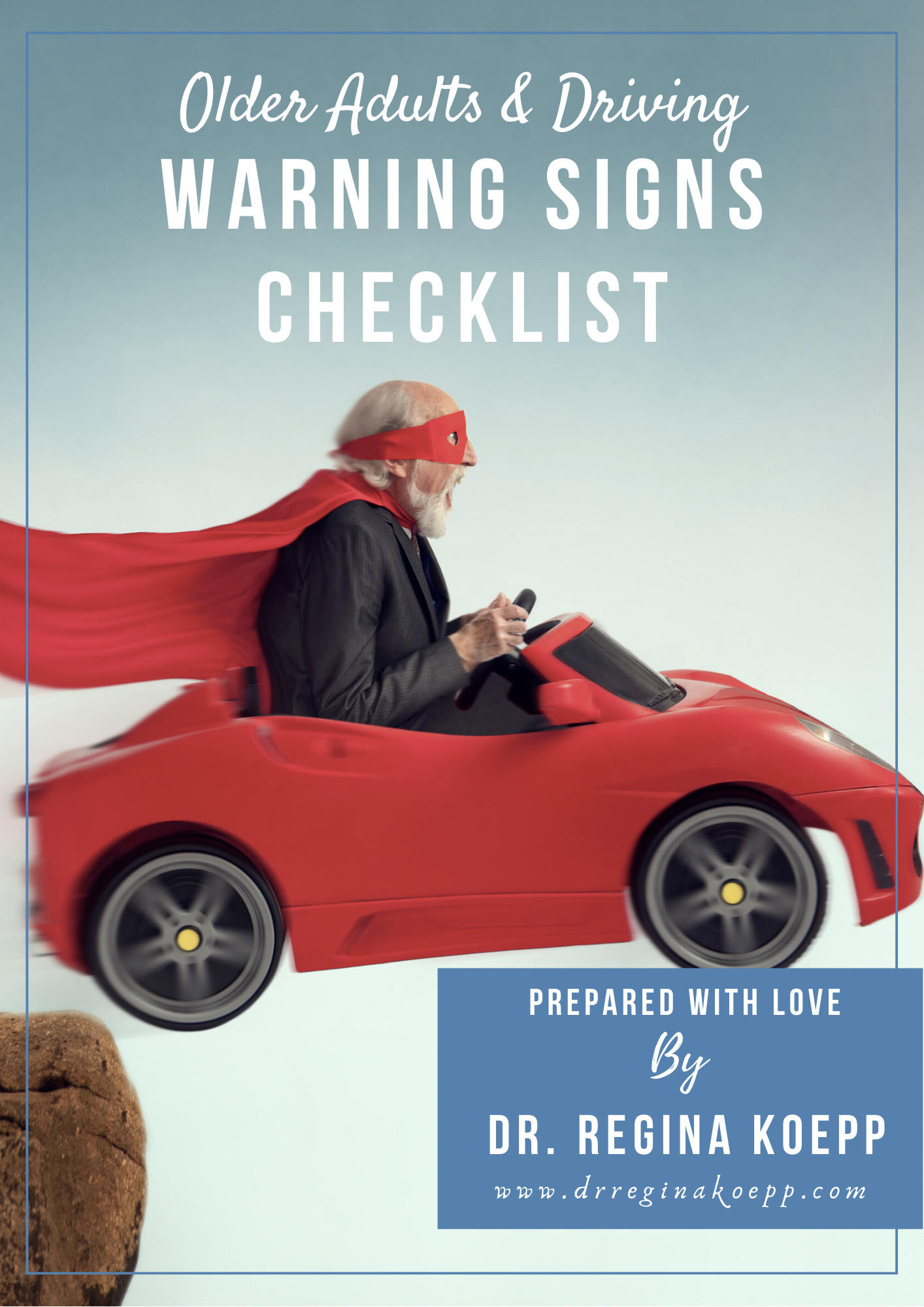 Here are the most recent episodes 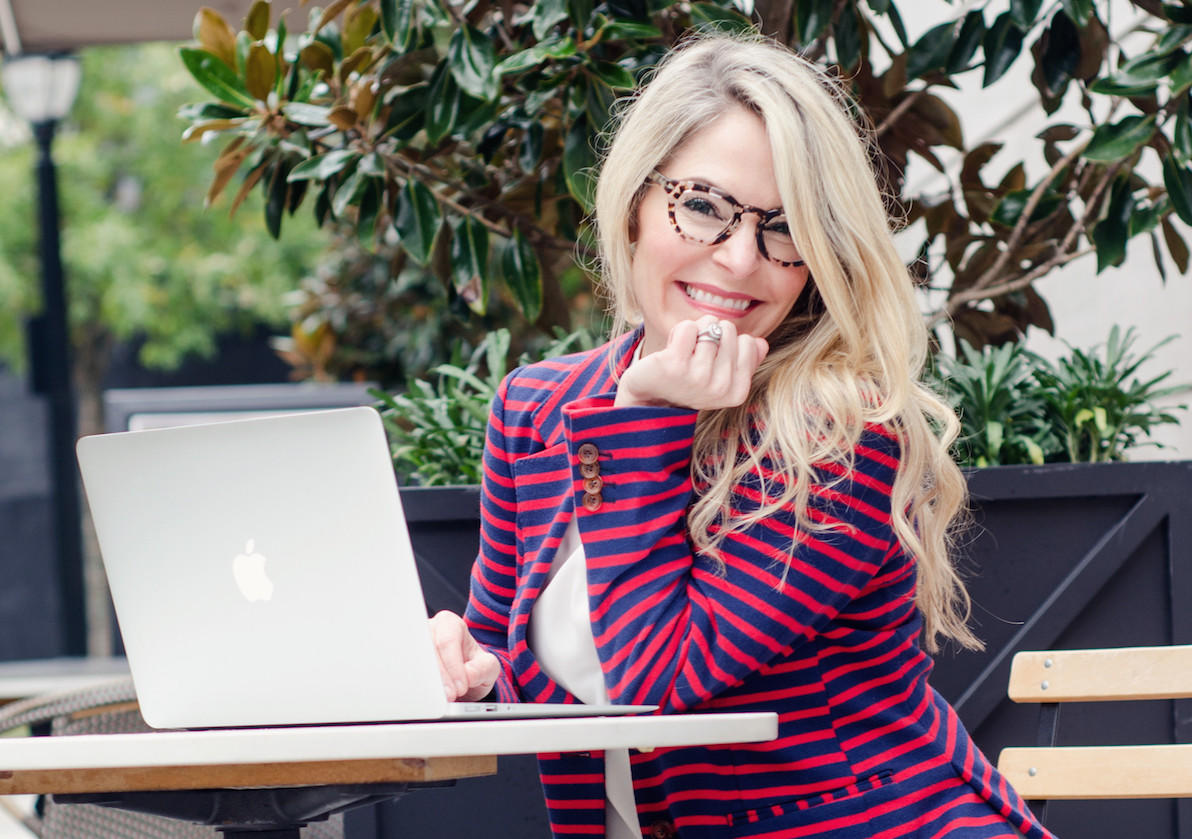 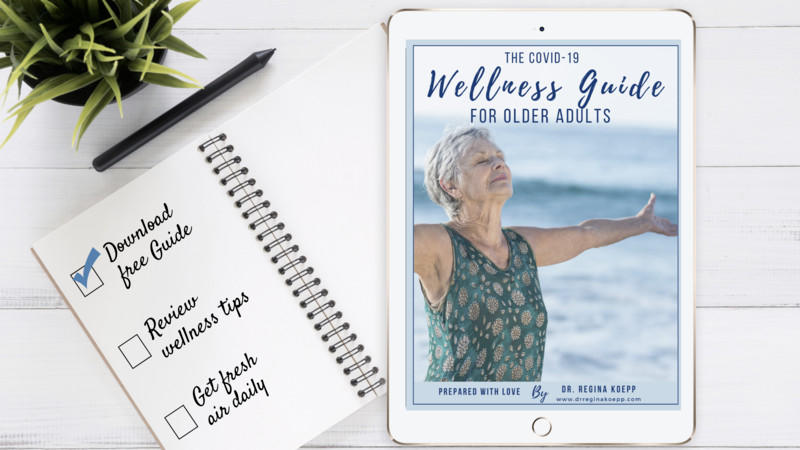 You'll get tips for staying mentally and physically well during the Coronavirus Pandemic.